Gulls are not the main interest for many birders but last week end was quite productive for this group of birds as 8 species were spotted. Despite the common Yellow-legged, Lesser Black-backed, Black-headed and Mediterranean Gulls, a few Audouin’s Gulls were present at Lagoa dos Salgados and a single Slender-billed Gull (with a very pink breast) was seen at Olhão. The main attraction came from 2 American species. First, a second-winter Ring-billed Gull, present at Lagoa dos Salgados since December. This bird is most likely the same that was found in January 2019 at the same place by A Rocha Life guide Guilaume Réthoré and came back. Then, on Sunday, during an A Rocha Life tour near Tavira, a Franklin’s Gull was discovered. This species is mostly present on the West coast of America and is therefore rarer in Europe.

Have a look at our tours if you want to see some great birds. 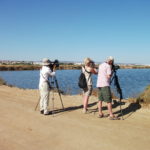 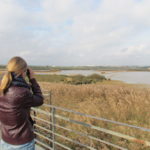