Which places to visit in Southern Portugal? The places with the most species recorded during the week long tours is the Ria Formosa with 143 species. Castro Verde and Lagoa dos Salgados are at the 2nd and 3rd place with 132 and 131 species. Sagres and Abicada are the 2 other sites with more than 100 species.

When coming to Southern Portugal for birds? Of course it depends of what you want to see. However, the months with the highest divesrity of birds recorded are April, March and October (198, 184, 179 species recorded during the different tours happening in these months).

There are still vacancies for the April and October tours. Have a look here. 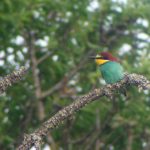