July has been a good month for ringed birds at Ria de Alvor. Besides the Flamingos, all from Spain, we also controled 5 Spoonbills and a Black-headed Gull.

Four of the Spoonbills were also ringed in Spain but so far only one Spanish bird had been controled in the area. Two of these birds had never been sighted and the other two had previous sightings in Senegal. The last bird was ringed in Germany (we are still awaiting for ringing data). It is the 3rd German Spoonbill controled at Ria de Alvor. The previous ones were sighted in 2010 but belonged to a different scheme, they had coloured-ringed while this one had an octogonal coded ring.

The Black-headed Gull was the first one ever controled at Ria de Alvor. Its origin was also a bit of a surprise since it was ringed in Poland. Only 4 Polish birds had ever been controled in the area, all during ringing sessions (a Reed Warbler, a Redshank and 2 Dunlins).

With more Flamingos appearing and wader passing through we hope to control more bird in August. 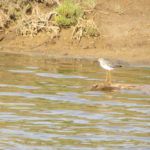 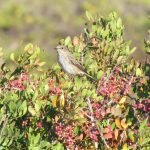