On July 24th, a Lesser Yellowlegs (Tringa flavipes) was found at Ria de Alvor during a wader count. The bird was feeding with other waders on a flooded area. This observation follows the one of a bird which stayed a few weeks at Paul de Lagos earlier this year (bird on the picture). Since the 2 places are about 5 km apart, it could be the same bird. However, the conditions did not allow a detailed observation of the bird. 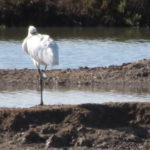