Six species of birds of prey were spotted, including a Griffon Vulture, probably a bird coming back from Sagres, and 2 Botted Eagle, also on migration. A Purple Swamphen also showed up for a couple of minutes, enough to record this unusual bird in the area. Quite a few migrants were still around, like Swift, Wheatear, Redstart, Pied Flycatcher and Willow Warbler. However some of the wintering birds have also arrived such as Skylarks, Crag Martins and Bluethroats. 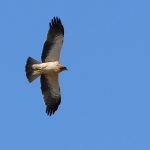 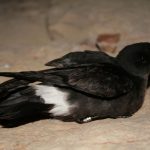