In Portugal, the lock-down ended at the beginning of May so we could go back outside birding! So, what happened since? Quite a lot actually…

The long-staying Great Egret is still at Ria de Alvor and was joined by at least one Purple Heron. Eight species of birds of prey have been recorded and good numbers of Audouin’s Gulls remain in the area. However, the highlight was a male Common Eider found on May 15th. Unfortunately, this bird did not stay long.

The biggest surprise came from Faro where a Yellow-crowned Night Heron was found. This bird, the 1st ever found on continental Europe (but all records come from Portugal) attracted many birders.

At the same time, a Ring-billed Gull was seen at Portimão harbour, possibly the same bird recorded earlier at Lagoa dos Salgados.

In the Alentejo, on a cloudy day, a Steppe Eagle was photographed soaring with Griffon Vultures.

Finally, last week, a strange looking crow was discovered near Lagoa dos Salgados. It appears to be a Rook (very rare species in Portugal) and generated animated discussions about this bird id which still remained unidentified.

Most of these birds were found by A Rocha Life guides. What about joining them on a tour? 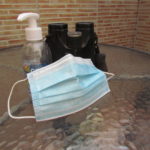 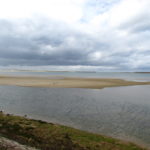