On June 15th, during a wader monitoring session, Peter Schutten (Dutch student in training course at A Rocha Portugal) and Guillaume Réthoré (A Rocha Life guide) discovered a Roseate Tern (Sterna dougallii) resting with Little Terns (Sternula albifrons) in the saltpans by the Western Marsh at Ria de Alvor. This is the 3rd record for the area, as a bird was seen in 1984 (date not available) and another one in 1994 (in May). This is also the 9th sighting in the Algarve and the 4th one for Western Algarve. Five sightings occurred in the area between Quarteira and Tavira, 1 in Portimão harbour (the first one, in 1973) and 3 at Ria de Alvor. In Continental Portugal, the species was recorded 23 times and is considered a rare bird. This species breeds in the Azores where the population estimate is about 1200 pairs (almost half of the European population!). 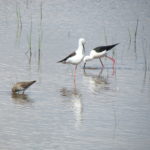 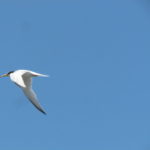