On June 13th, Ben Porter, part of the Storm-Petrel ringing team found a Little Swift flying over Cruzinha with Common Swift, a great sighting and the 5th record for the Ria de Alvor area (the last one being in 2014)! A few hours later, at Cape St Vincent, many Swifts were flying north and another Little Swift was found with them! Two Little Swifts during the same day! The story does not stop here as on June 17th, at Foia (Monchique), we were watching a flock of swifts, looking for something different when we found another Little Swift!

Until now, there had been 17 sightings of the species in continental Portugal, these are the 18th, 19th and 20th sightings.  The species is known to breed in Spain. Until 1920 the northern limit range of the species was Marrakech and then Tangier on the 1950’s. After, the species was spotted several times in Spain but its breeding only prooved in 2000. Are the birds of June 2018 juveniles dispersing or adults looking for a breeding place? 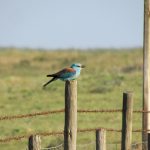 A day trip to the AlentejoReports, Tours