On June 23rd, in the middle of the Stormies’ season, I went to the Ria de Alvor marsh for a wader count before heading back to the cliffs. The old saltpans had a nice water level and were full of birds, mostly gulls and terns. Among the many Yellow-legged Gulls, a few Lesser Black-backed, Audouin’s and even a Great Black backed Gull were resting. The first Black-headed and Mediterranean Gulls were also back at the marsh. A few Little Terns, including some juveniles were present, an interesting sighting since no proof of breeding has been found this year. While counting the Sandwich Terns, I saw an orange bill. Moving a little to see the bird from a different angle, I confirmed I had seen an Orange-billed Tern, but which one? The bird was seen about 10 minutes on the ground, always with Sandwich Terns and then it took off. This allowed me to take pictures and write a small description of this bird. Back at Cruzinha (A Rocha Portugal field study centre), I checked quickly some books (whilst preparing for fieldwork) which confirmed my first ID as a Lesser Crested Tern. The bird was seen again the day after and some flight shots validated the identification. This was the first record of this species at Ria de Alvor. 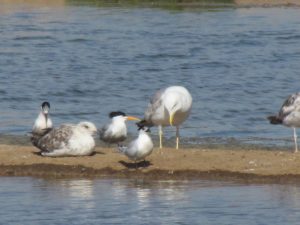 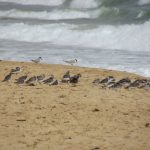 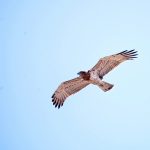