What happened in June at Ria de Alvor? The dyke is still down and things are going worse and worse. Number of Grey Herons, Spoonbills and Little Egrets have increased, possibly birds already coming back from breeding grounds. Between 200 and 90 Flamingos are still present. A couple of Short-toed Eagles have been showing from time to time and a Booted Eagle was also seen soaring over the area and attacked by one of the local Marsh Harrier. As usual at this time of the year, few waders are around but up to 6 species of gulls can be seen. Yellow-legged Gulls are present all year round, and a few Lesser Black-backed Gulls spend summer in the area. Some Black-headed and Mediterranean Gulls are already back from the colonies and are joined with Audouin’s and Slender-billed Gulls (a species with many more sightings this year). The highlight of the month was definitely the Roseate Tern found on the 15th at the saltpans.

The 3 species of woodpeckers found in Portugal are present in Cruzinha garden with a Red-necked Nightjar. A Blackcap decided to stay around Cruzinha as a male is heard singing almost every morning. Unfortunately, very few Woodchat Shrikes are spotted this year. This seems to confirm the decline of this species (at least in the area). 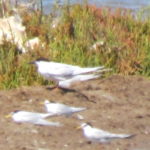 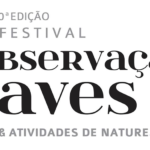