On September 26th, a light morph Eleonora’s Falcon was spotted at Abicada. This is the 6th record of the species in the area and the first one since 1996 (all the other records were in the 90’s). This species is regular around Sagres between late August and September but more scarce in the rest of the Algarve (there is only one other observation of the species outside Sagres at this time of the year).

This species is known to breed late and feeds its young with the passerines crossing the Mediterranean sea. It spends winter in Madagascar.

More than 40 species were spotted during that morning.

Have a look at our great tours! 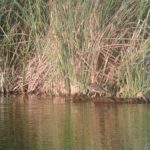